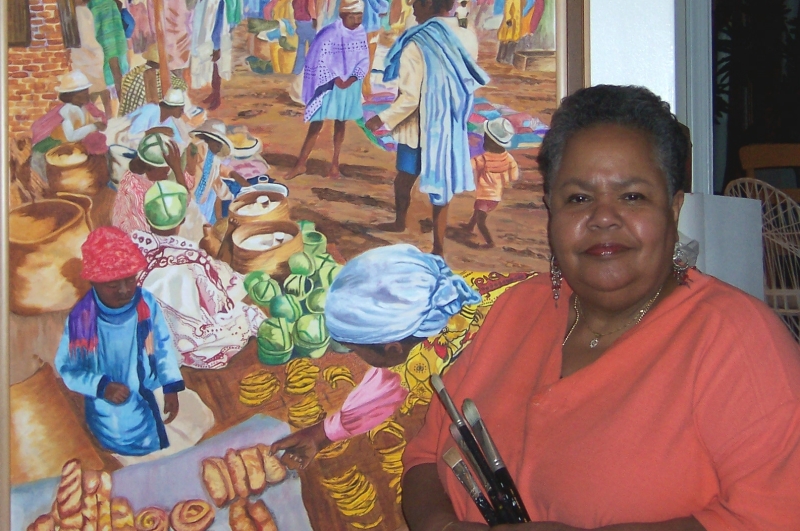 Carmen is a native Washingtonian, born of Dominican and Puerto Rican parents. Bilingual and bicultural, she was educated in local parochial elementary and secondary schools. Carmen vividly remembers working on “pictures” from the age of four. In school she was always the kid who could draw, and the one who consistently included expressive drawings to supplement her written reports.

Knowing she would have to earn a living, she opted to major in commercial art, which required her to focus upon perfecting her drawing skills. It was in her first figure class that the instructor informed her that she was going to be a  fine artist. Carmen has never looked back. Her ability to capture a likeness and her love of realism bring a calm but passionate response to ordinary subjects. Her extensive and continuous academic training includes: the Corcoran School of Art, Pratt Institute, New York University. the Art Students’ League, plus post graduate study at Catholic University in Washington D.C., and numerous workshops and seminars.

An instructor of fine art for the past 20 years Carmen demonstrates watercolor methods throughout the Washington, D.C. area; often travels abroad for artistic inspiration and source material, including trips to Africa, Latin America, Europe, the Caribbean, the Middle East, and the Far East. Her artistic works hang in many private, corporate, and public collections throughout the western world. She continues to participate in exhibitions and competitions, and has received numerous recognitions and awards. In addition to being a representational artist, Carmen is a curator and an educator.

Carmen’s skill lies in her ability to own her subjects. First, she sketches then takes numerous photographs. From this moment she starts mentally painting, wasting no time in deciding what it is that she sees. From the outset, she calculates for the purposes of translating what she sees to the paper or the canvas. As a result, what she sees and likes is immediate, intuitive, and generally readily accepted. She achieves her best effect when she feels a connection to her subjects, a bond she often finds in portraits incorporating children and serene landscapes. Pretense does not exist in her work. She often says, “painting what I see gives me a certain freedom of self expression without apology.”

In addressing her art students, Carmen has been known to explain to them at the outset, that for anyone to claim that representationalism may be deemed the zenith of self expression in the post-post modern context that we live in, is risky in an art world which has latched itself to the idea of abstraction (both in art and in thought) as a means to achieving a closer relationship to individuality and reality.